“Showing that the chocolate industry can be different, without child labour” |

“Showing that the chocolate industry can be different, without child labour”

Fifteen years ago Thierry Noesen started the company Belvas in the province of Hainault, as the first fair trade chocolate manufacturer in northern Europe. Since then Belvas has consistently opted for sustainability and the company has specialised in organic chocolate, setting up a number of projects in Peru and Côte d’Ivoire to improve living conditions for the cocoa farmers it buys from. Belvas is now building a local cocoa processing plant in Côte Ivoire which could represent a social and environmental breakthrough in the chocolate sector. 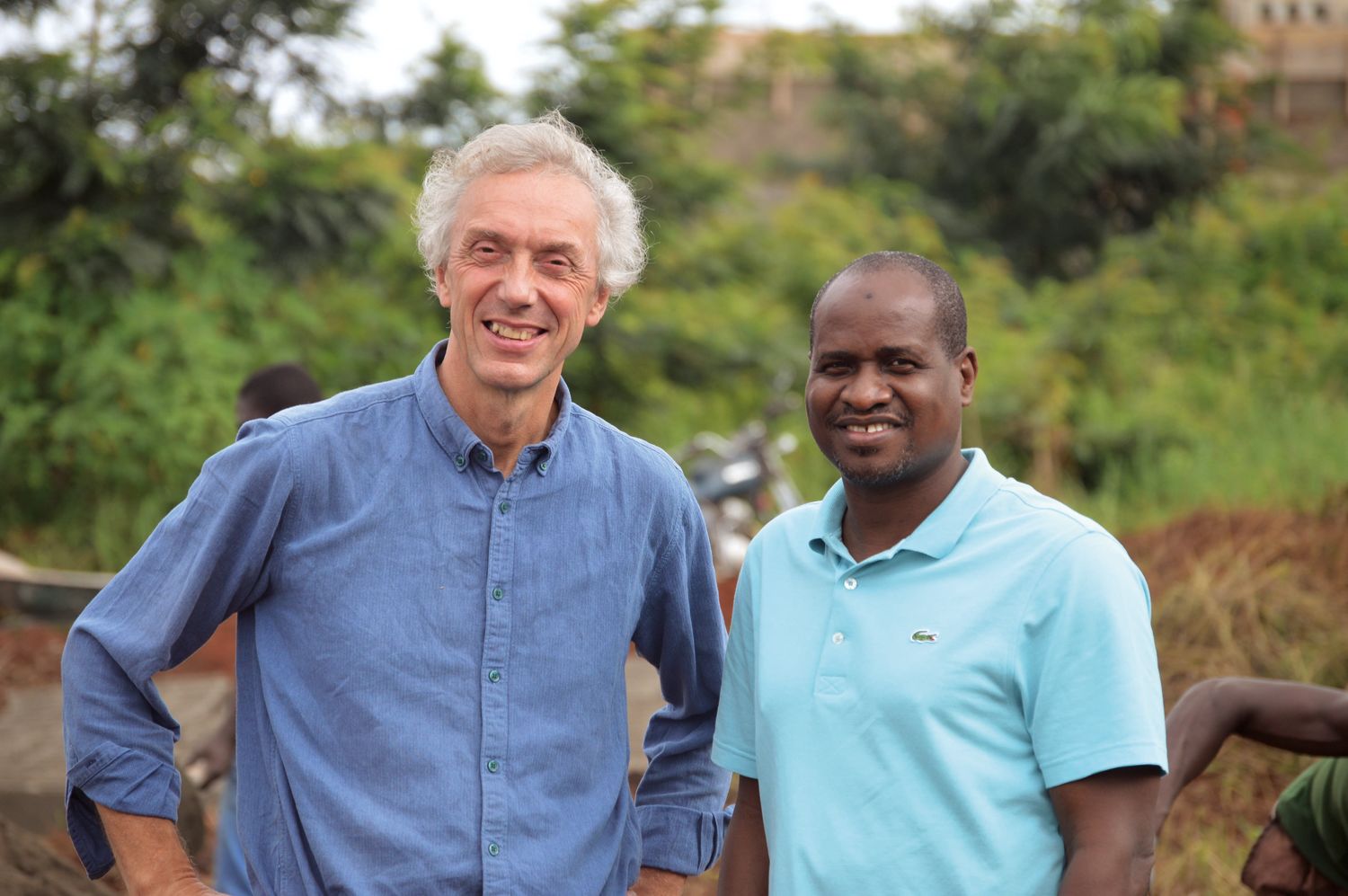 “The chocolate industry is very international – our cocoa producers are in Peru and Côte d’Ivoire and we export about 85% of our chocolate to other countries – and in our sector you are unfortunately almost always contributing towards bad social and environmental situations”, says Noesen. “Some time ago I saw a striking documentary on television about child labour on cocoa plantations in Côte d’Ivoire. Of course everyone knew it was happening, but the images drove the message home hard.”

The figures on child labour in cocoa farming certainly make grim reading. According to a study by fair trade organisation Max Havelaar, in 2013-14 there were more than 2.03 million children working under hazardous conditions on cocoa production in Côte d’Ivoire and Ghana. ‘Hazardous’ could mean that the children are coming into contact with harmful chemical agricultural products, child trafficking or forced child labour is occurring or children are being abused or made to engage in illegal activities. Côte d’Ivoire is the largest cocoa exporter in the global market, and together with Ghana the country accounts for almost two-thirds of global cocoa production.

The extent of child labour can be partly explained by structural poverty among cocoa farmers: in Côte d’Ivoire they earn approximately one-third of what would be a ‘viable income’. According to the research agency True Price, the current income of cocoa farmers in Côte d’Ivoire is about $0.78 per day, while the ‘viable income’ has been determined to be $2.51. That has a major impact, even on the chocolate. “If you consistently fail to pay the right price, you also don’t get the right quality”, says Noesen.

“I don’t want to leave the chocolate industry in ten years’ time knowing that there was child labour and I did nothing about it. I want to have made an effort to do something.”

“After watching that documentary I made a decision”, he says. “I wanted to improve conditions for these cocoa farmers by setting up fair trade with them. I had two options. I could guarantee our customers high-quality organic chocolate without child labour, produced in Peru. Since the situation in Côte d’Ivoire is much worse than in Peru, however, we were also able to make a greater impact there. At Belvas I am in a position to really change things. So I started looking for an Ivorian cocoa farmers’ cooperative we could work with.”

“Two years ago we started a collaboration with a cocoa farmers’ cooperative in Côte d’Ivoire. Belvas pays the farmers a price that gives them a viable income: we provide a bonus to make up the difference between the market price and the price that provides a decent income. Today, for example, that is twice the market price. The cooperative we were working with was unable to offer an organic guarantee, which meant that we could not sell the chocolate to our regular customers, so we presented our project to Carrefour. They came on board as a partner and we named the project Direct Cocoa.”

“Direct Cocoa has four aims: to stop child labour, to diversify crops so that farmers are not solely dependent on the price of cocoa, to emancipate women and to restore local biodiversity. However, I wanted to go one step further. For about ten years now I have been thinking that we should be able to generate the added value that comes from processing the cocoa beans locally”, says Noesen. “Today, with the exception of fermentation, all the processing steps take place in the Western world. However if we could organise roasting and grinding of the cocoa beans in Côte d’Ivoire, that could have a huge impact in both economic and environmental terms.”

The reason for this can be explained by the production process. After ripening, the cocoa pods are picked by hand, cut open and fermented for five to seven days. This has to be done immediately, because the beans begin to rot after three days. Fermented beans are usually placed in sacks, shipped and then cleaned, roasted and winnowed to make cocoa mass. “That is where the opportunity lies”, says Noesen. “During winnowing, a thin shell comes off. That shell accounts for 20% of the weight. That is significant when it comes to transportation.”

“If winnowing and cocoa mass production could be done locally, the volume of cocoa beans would be even smaller: local roasting and winnowing would mean that we would only need half as many containers and therefore only half as many ships. Another advantage is that fewer live insects would be imported along with the product. Blocks of cocoa mass are also more resistant to moisture and heat than cocoa beans themselves, which can rot during transportation. Installations to roast and winnow cocoa beans are also quite easy to build locally.”

Local processing could also counteract the soil impoverishment and deforestation, which are growing problems in Côte d’Ivoire. “You actually need fertile soil and adequate shade to grow good cocoa. Due to tree felling, cocoa growing in Côte d’Ivoire is becoming more dependent on artificial fertilisers, and the soil is rapidly becoming impoverished. The shells around the cocoa pod can be used as fertiliser. It would be logical to use it locally in cocoa plantations, certainly when you consider that African farmers spend up to a third of their income on artificial fertilisers and pesticides.”

“When I heard about the call from the King Baudouin Foundation, I saw my chance to start up a local cocoa processing factory like this. We are working on this project with a cooperative that sells organic cocoa beans. The factory will be in Daloa, in the centre of Côte d’Ivoire, and will start operations in mid-2020. The factory will cost an estimated €1,050,000 and should produce 450 tonnes of organic chocolate mass per year. The fact that the Business Partnership Facility is supporting this project is not only financially helpful, but it also means a lot in terms of motivation and recognition.”

“At Belvas we process about 600 tonnes of cocoa each year”, says Noesen. “We do use some of our cocoa production ourselves, but the largest share is destined for the international organic market. Four hundred and fifty tonnes a year is a relatively small amount, and that works because it is organic chocolate. To be competitive in the market, however, the volume needs to be at least ten times higher. That is also our aim: within four to five years we are planning to have a larger production facility alongside the existing factory. For the first factory in Daloa we are still using of a lot of know-how from Belgium: technical knowledge about machinery, know-how on running a factory and about cocoa processing ‘from bean to bar’. When it comes to the second factory, we will be able to employ people who have been trained locally.”

If the cocoa is processed locally, how is it still ‘Belgian chocolate’? “It will still be Belgian”, says Noesen. “Here we are experts in blending, which means creating the best recipes to make delicious chocolate. The process of blending cocoa varieties was invented by the Callebaut brothers. The magic of our chocolate, for example, is that it is a mixture of cocoa from Côte d’Ivoire, Peru and Cameroon, which provides the attractive colour. Those areas are a long way apart. Belgium acts as the intersection where flows of cocoa come together and chocolate is produced.”

“I am currently writing a book because there is a real need for social and environmental change in this sector”, says Noesen. “When I started thirteen years ago, I never thought my company would become a means rather than an end. A way to go beyond our local, individual impact. My aim with Belvas is to show that things can be done differently. I will be turning 60 this year. I don’t want to leave the chocolate industry in ten years’ time knowing that there was child labour and I did nothing about it. I want to have made an effort to do something.”

The Belvas project in Côte Ivoire is being co-financed by the Business Partnership Facility (BPF), a financing tool created in 2018 by the Directorate-General for Development Cooperation and Humanitarian Aid (DGD), part of the Ministry of Foreign Affairs. It is managed by the King Baudouin Foundation. The signatories of the Belgian SDG Charter for Development have therefore expressed their commitment to contribute towards the UN’s Sustainable Development Goals (SDGs).