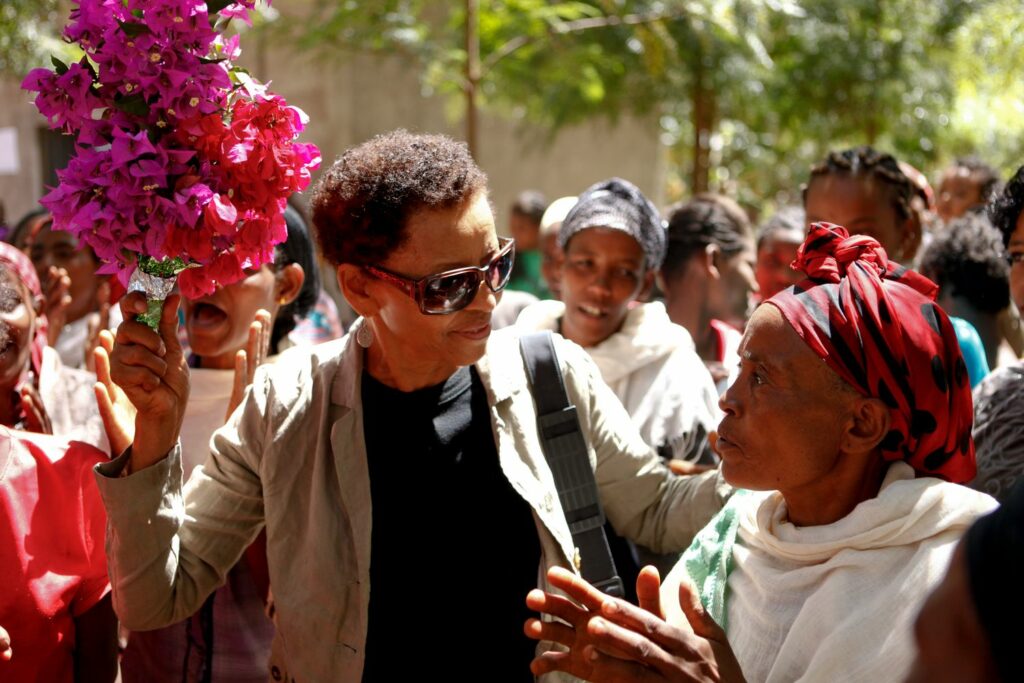 Bogaletch Gebre was subjected to brutal female genital mutilation when she was 12. One of her sisters died in childbirth as a result of the practice. Gebre was a determined, fiercely independent young girl. When she saw the Amharic alphabet on the wall of her cousin’s house, she memorized all 268 characters. Later, she ran away to a missionary school and became the first girl in her village to receive primary education. She won a scholarship to attend high school in Addis Ababa, then moved to Jerusalem to study microbiology. That led to a Fulbright scholarship to the University of Massachusetts, Amherst.

Gebre was working on her PhD in epidemiology in Los Angeles as her country was mired in famine, poverty and political turmoil. Girls were still being mutilated, abducted and raped. She returned home in 1997 with US$5,000 and a vision. She and her sister Fikirte founded KMG and began a series of groundbreaking ‘Community Conversations’ to engage men and women in confronting culturally entrenched taboo issues through dialogue. She believes that change takes commitment, not a miracle.

A 2008 UNICEF study confirmed that in just 10 years, the incidence of female genital mutilation in KMG’s areas of operation dramatically decreased from 100 per cent to less than 3 per cent of newborn girls. UNICEF recommended KMG’s model be replicated in other regions of Africa.

A few questions to Bogaletch Gebre

How did KMG transform communities?

“There is no prescription. You make a commitment, then everything you do speaks to you if you are willing to listen. For social change, you must go to the people, to really listen to them and learn from them. It is all about commitment. As a young girl when I spoke to elders, I had to look at their feet, not their faces. As an adult, I stood in front of a congregation of 800 men, women and children. I said female genital mutilation is not prescribed in the Bible or the Koran. So where did the practice come from? Why are we ‘correcting’ God’s work? Everything is contextual.” When Gebre showed a film depicting female genital mutilation to a group of men, four vomited and one passed out.

What about women’s rights?

“When speaking to women about equality, it was a total awakening. When they said they have no recourse if their husbands beat them, I explained their constitutional, legal and human rights. We learned how to link the political, economic and social problems that affect women’s lives. They have the capacity to change. But real change must happen within communities. Everyone must teach each other and learn that what is good for women and girls is good for the community.”

What is key to building self-confidence in young girls?

“From birth they need equal opportunities to help them understand that their intrinsic value is the same as men. Education is key, even though they are expected to follow in their mothers’ footsteps and perform household chores for their entire lives. It’s working. Just last week we awarded 390 girls with above a 3.5 grade point average. They will go to university. If a girl is given an equal footing, she will find her own space and voice in life.”

Development must be about transformation

Carlos Lopes, who served as an advisor to the Prize’s independent selection committee, believes that solutions to address development challenges in Africa must be found from within the continent. He says that both Bogaletch Gebre and the 2010/2011 recipient of the King Baudouin Prize, Dr Denis Mukwege, who is working tirelessly in the eastern Democratic Republic of Congo, are catalyzing profound change at the local level. “But the results of their work is the foundation of a very universal model that showcases how innovation can transform communities without the help of government.

Bogaletch Gebre is “contributing to meeting the development challenges of the continent in a very unique and innovative way,” says Carlos Lopes, Executive Secretary of the United Nations Economic Commission for Africa (UNECA).

By recognizing Gebre’s work, the prize “shines a spotlight” on a woman whose work is creating role models.

It also showcases the approach and values that contribute to the success of her work. “The Prize is contributing to making development transformation a reality and not just recognizing an individual.”