In Bujumbura, Elie Nyerere is trying to protect the environment in an area that is coming under threat from coffee processing. Coffee generates the majority of foreign currency in Burundi. With help from the King Baudouin Foundation, he has created the Maison pour l’Analyse et l’Expertise Environnementale (Centre for Environmental Analysis and Expertise), with the aim of improving waste water from coffee cherry washing plants. 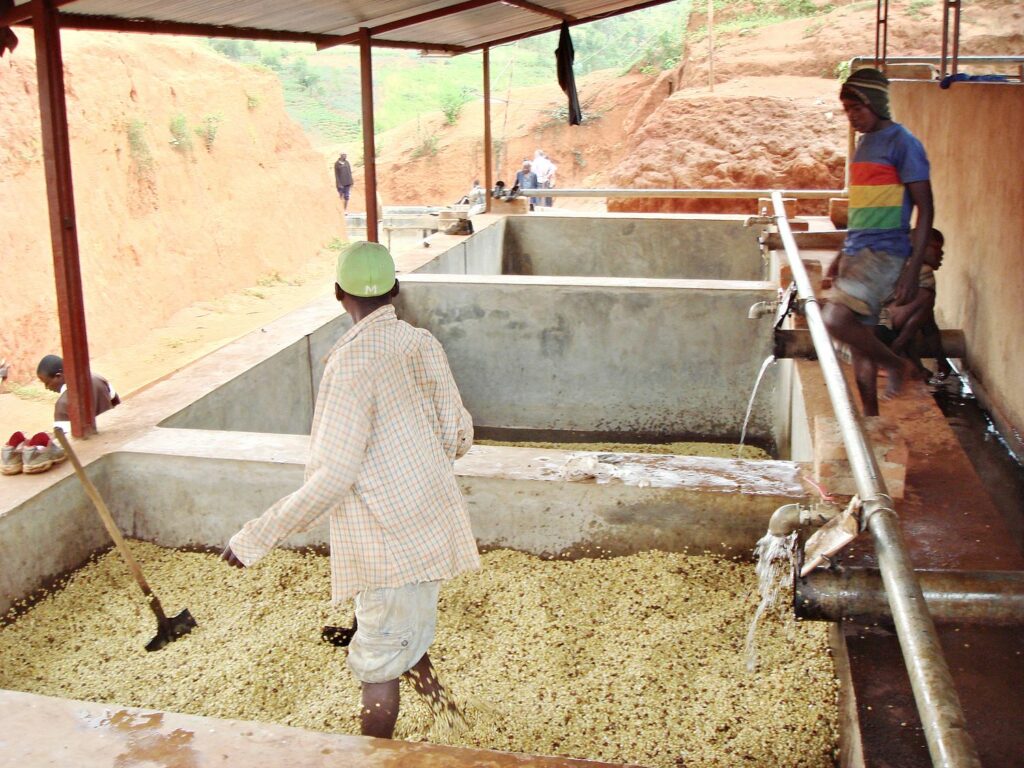 Elie Nyerere had been head of an analysis laboratory in the Burundian capital for three years when he realised that he could go no further. “I realised that in many cases I was unable to offer the cooperatives involved in coffee production satisfactory answers in relation to their problem of waste water treatment”. In 2017 he received a mobility grant from the Elisabeth and Amélie Fund, which is managed by the King Baudouin Foundation, to work on his Master’s degree in Environmental Science and Management in Developing Countries, at ULiège. That was an initial boost. It was also the first time his work had received recognition. He chose to write his final dissertation on “analysing waste and polluted water generated by coffee washing plants upstream from Lake Tanganyika in Burundi, and improving waste water treatment in those plants”.

Coffee as a water polluter

Despite the crisis in Burundi and the significant deterioration in land quality in recent years, which is jeopardising production, coffee is still the country’s main source of money. Some 580.000 Burundian households (out of 1.6 million) – among the poorest rural families in the population – are dependent on coffee growing for survival.

“Coffee is a very big consumer of water”, explains Elie Nyerere. “Water treatment in washing plants, some of which were built in the 1980s, is also a worrying source of water pollution”. The same is true for coffee processing, which mainly involves washing and de-pulping the cherries: the organic material in the pulp, which is not easily degradable, contaminates the soil and water table and clouds the surface water. These pollutants use up the oxygen in rivers and streams that is needed by flora and fauna. This is what the scientist is concerned about: “the polluted water gives off a bad odour; it has become unsuitable for consumption and even for irrigation”.

While working on his final dissertation in Belgium, Elie Nyerere became aware of the urgency of this situation and also realised that the equipment being used is not fit for purpose: “The waste water treatment systems used by cooperatives were ineffective: it was necessary to make a new, effective tool available to the population as quickly as possible”.

However, things are never easy: there is a shortage of experts in sustainable management, insufficient funding to build and equip waste water treatment laboratories, stakeholders and users in the water sector are poorly trained and there is a lack of information… In other words there are many obstacles that need to be overcome before it will be possible to restore an environment that has suffered from the effects of untreated water cascading down the slopes.

Above all, there is a desperate lack of money in Burundi. When he returned, however, Elie Nyerere received assistance from the King Baudouin Foundation, which provided a loan for 35,600 euros to help him to create his company: la Maison pour l’Analyse et l’Expertise Environnementale (MAEE). It also put him in touch with COCOCA, the consortium of coffee grower cooperatives. “We signed a partnership agreement. The MAEE will provide services to coffee grower cooperatives within the COCOCA: waste water analyses, training courses and studies on the environmental and social impacts of installing new waste water treatment plants”, explains Elie Nyerere, who aims to stop the damage being done to the environment by poorly treated water.

“More than just a boost, this is a dream come true. Without the Foundation, none of this would have been possible. I am sure there is still time to improve the situation. I believe it!” insists the scientist, who is waiting for one final document from the authorities before his expertise centre in Bujumbura can open its doors.

The MAEE is promising to improve performance in the area of waste water treatment, which is mostly inadequate, specifically because treatment tanks are too small. It has also decided to set up a modern laboratory so that it can work on the basis of scientific evidence. So more than half of the loan from the Foundation will be used to purchase measuring equipment, which is essential for implementation of this project. The project will make a huge difference to a large proportion of the Burundian population that is still completely dependent on coffee growing and exposed to its impacts on the environment.

About the Elisabeth and Amélie Fund

The Elisabeth & Amélie Fund was created in 2007 within the King Baudouin Foundation by five women wanting to finance water-related projects in the South. Since its creation the Fund has supported 145 projects to improve access to drinking water in countries in the South, with funding totalling more than 3.5 million euros. The 2019 call for projects is now open and it is focusing on projects in the area of access to water and/or sanitation in schools.

Since 2015 the Fund has also been awarding mobility grants to allow students from the South to work in Belgium on final dissertations in the area of water management. The Fund has already awarded 47 grants totalling 184,209 euros.