Birth of a pediatric clinic in DR Congo

Benoît Mbiya gained his degree in paediatrics in Belgium, but throughout his studies he kept alive a wish to return to practice in his native city of Mbujimayi. With support from the King Baudouin Foundation, and thanks to his own tenacity, Benoît has created the Paediatric Clinic in the second most important city of the DR Congo after Kinshasa. 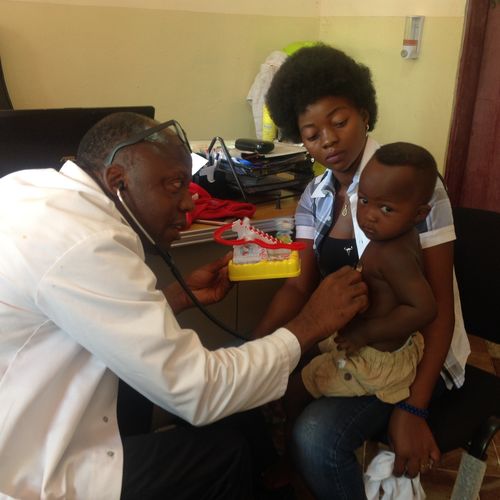 After completing his medicine degree at the University of Mbujimayi and three years’ specialised study in paediatrics, Benoît Mbiya was awarded an Erasmus ACP (Africa, Caribbean, Pacific) grant in 2011, which enabled him to study transfusion medicine for a year at the University of Liege. “This specialisation seemed to me to be particularly apt because in the Congo many transfusions are made for young children suffering from infectious diseases” Benoît explains. Ten Congolese benefitted from this grant in 2011, but only Benoît has returned to the Congo.

During his first ‘Belgian’ year, the student never wavered from his objective of practicing paediatrics in the Congo. He sent many mails and raised awareness among Belgian paediatricians about the reality of Mbujimayi, a former province of five million people with only two paediatricians. “Because of the decline in activities of the Bakwanga mining company (MIBA), the economic situation deteriorated and poverty increased.” says Benoît Mbyia. “The MIBA also played an important social role via the two hospitals that it managed and which each employed one of the only two paediatricians in the city. Life in the region became increasingly difficult, with the result that one of the two paediatricians left to work in Botswana and the other took retirement.” In the Congo, the absence of a social security system and people’s deprivation mean that, for most people, healthcare is inaccessible. Doctors are awarded a ‘risk premium’ by the State but for most even this is insufficient for them make ends meet each month. As a result, many doctors leave the Congo at the slightest opportunity.

With great determination, Benoît Mbyia won a further grant and finalised his specialisation in paediatrics, this time at UCLouvain. “I got my degree in 2015, but in parallel I completed a training at the Return to Care Foundation, which supports young Africans who wish to complete their projects in their own country.”

During this period, the situation in the two hospitals of Mbujimayi worsened. The material deteriorated, doctors left, the elderly paediatrician was begged to return to treat the influx of young patients. Benoît Mbyia returned home to the Congo with his hands full: the University offered him five incubators and fifteen computers; the Chaîne de l’Espoir Belgique offered him an instrument that records vital life signs, the Sysmex company a haematology analyser.

What remained was to find a site for the clinic. Prices are high and the paediatrician had only 1,000 euros. Benoît decided to rent a dilapidated two-roomed building that had been unused for years. The University of Mbujimayi advanced the rent guarantee to him. He whitewashed the walls and painted in large red letters on the façade: Mbujimayi Paediatric Clinic. “I sent photos of the clinic to the King Baudouin Foundation, with a letter explaining the project’s development. The Foundation granted me financial support so as to renovate the two rooms and annex the adjoining building, to acquire a series of neonatal equipment and train someone to use the instruments.”

“Today, the clinic attracts training institutes and requests for internships are increasingly numerous.”

Benoît Mbiya, paediatrician and founder of the Paediatric Clinic of Mbujimayi

However, the Foundation could not provide long-term support for a project conceived in a rented building, but in September 2018, it provided a loan of 80,000 euros to the asbl Clinique Pédiatrique de Mbujimayi to purchase a larger building, so that the clinic could become the owner of its own building. “I set up my quarters in a larger building that now has 20 beds that are always all occupied.” The hospital continues to grow, thanks to the generosity of other donors who offered a further incubator, operating tables, delivery tables and babies’ cots. “Today, the clinic attracts training institutes and requests for internships are on the increase too” says the thrilled paediatrician.

Doctor Mbiya still dreams of creating a special unit for treating sickle cell anaemia, a widespread genetic disease across the world, but whose full force is felt by those in Africa, people who are already disadvantaged. Children suffering from this disease have to be hospitalised on average four times a year. “For two years, the clinic has been assuming responsibility for the consultations, examinations and costs of medicines for 250 children.”

Despite life being difficult, the paediatrician has nevertheless been able to make his dream come true: being useful to the society from which he comes. And in return, the people of the Congo have offered Benoît his most treasured gift: their confidence in him.

Since 2015, the Paediatric Clinic of Mbujimayi has received three support grants from the Jourdain Fund, managed by the King Baudouin Foundation, amounting to a total of over 50,000 euros. In 2018, the Foundation awarded the clinic a loan of 80,000 euros, for which a first reimbursement was already made in January 2019.