Waste as a source of new opportunities

Plastic soup, or contamination with plastic and other waste, is often directly harmful to people in developing countries. In Nigeria the young company Wecyclers is encouraging more and more people to collect waste for recycling. This spring Wecyclers was awarded the King Baudouin African Development Prize for its innovative approach and social impact.

“Is she collecting waste? She must be mad!” Tonnes of waste accumulate in the streets and drainage ditches of the poorer neighbourhoods of Lagos, which with 21 million inhabitants is the largest conurbation in Nigeria. Only 40 percent of the 10,000 tonnes of waste that are added to the pile in this city every day are collected by waste collection trucks. The rest is mostly just thrown away. The thought that by 2100 the growing city of Lagos could be the world’s largest city only makes this problem more urgent.

“Our primary aim is still to improve the lives of many people. We are doing this by addressing a major problem: waste.”

In seven neighbourhoods in the city, however, plastic bottles are being industriously collected. “After you have finished that, don’t throw the bottle away, will you? Just put it in my bag!” In only a few days, the manager of a small shop has ten large bags again. The collector from Wecyclers will be coming soon. They will weigh the plastic in front of her, and soon afterwards she will receive a text message to tell her how many points she has earned. She can exchange these later for food, a household appliance or cash.

Wecyclers was founded in 2012 by Bilikiss Adebiyi-Abiola. After graduating from the prestigious university MIT in Boston, she did not go for job offers in the US but instead decided to return to her own country. Her idea was to help to tackle the major social needs and environmental problems at the same time. “In the beginning my family and friends also asked me if I was mad: to get a degree like that and then go off pushing barrows full of rubbish myself?” It was not easy to find start-up capital at first, since no bank was willing to offer her a loan.

A total of 17,000 households are now registered with Wecyclers, in seven districts of Lagos. A good collector can earn an extra half a month or even a whole month’s wages in a three month period, and a few of them even make it their main income. Wecyclers also employs 125 people, 60 of whom are women. Many of them work in five depots to process the waste that comes in: labels are removed from the bottles and they are sorted by colour. “Our plastic is much cleaner than what the waste-pickers find on the big landfill sites. So the companies that use this plastic as a raw material pay us a bit more”, says Bilikiss Adebiyi-Abiola. 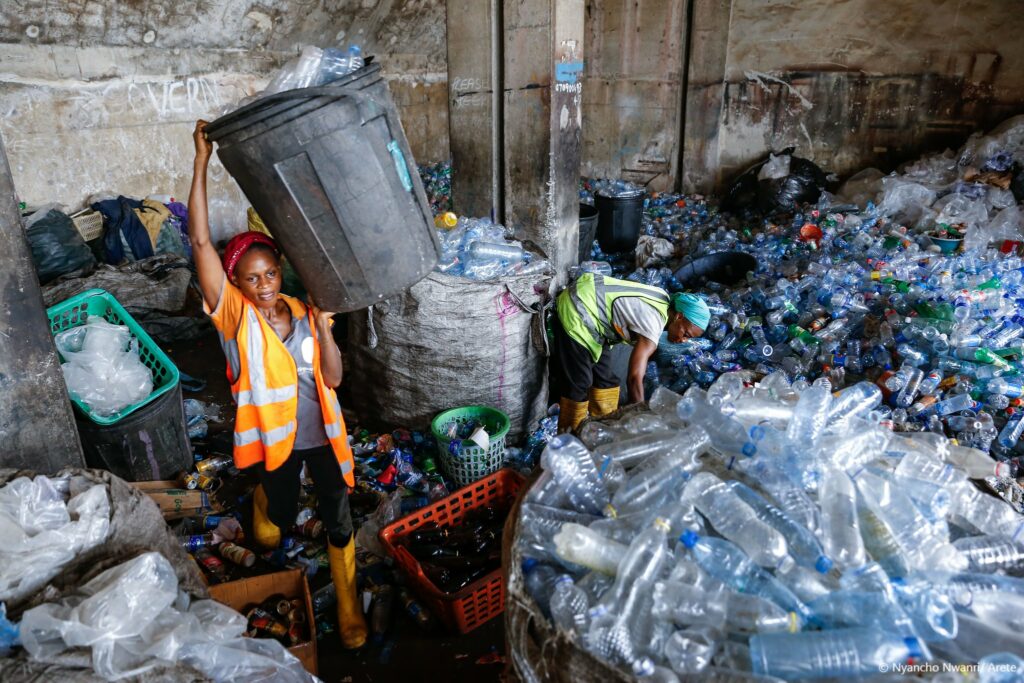 “When I look at a plastic bottle, I see value”, says her brother Olawale Adebiyi, who is now leading the company as CEO. “Our primary aim is still to improve the lives of many people by creating jobs, and also by giving households the opportunity to earn money from their waste. We are doing this by addressing another major problem: waste.” When the ditches are no longer filled with plastic, the water will flow better and malaria mosquitoes and other carriers of disease will not multiply so much. People appreciate the fact that their neighbourhoods are getting cleaner, and they are starting to be convinced.

The idea that there is value in waste is gradually getting through, so more small businesses are being set up to collect and/or recycle it. “Competition? No problem, there is more than enough work!” Wecyclers understands that it is only recovering a tiny fraction of the many tonnes that are there, and is eager to do more itself, collect more waste in more neighbourhoods in Lagos and other cities or even outside Nigeria, process more and have a greater social impact. The organisation is already collecting plastic waste from businesses, hotels and (government) organisations. They are not paid for the waste but they actually pay Wecyclers, creating a new source of income. The first franchises in additional neighbourhoods are also in place now: these are run by a team of collectors, who sell their catch to Wecyclers. Working in collaboration with an environmental organisation, there is also a trial project in a school, where children can pay their school fees by handing in plastic, which Wecyclers then comes to collect from the school.

Dream for the future

The 200,000 euros linked to the KBF Africa Prize is a welcome support for these expansion plans. Wecyclers wants to buy more vehicles to collect waste in the slums – the cargo bikes used in the early years have been replaced with motorised tricycles – and a storage area has been bought to help to respond to the fluctuating prices of recycled plastic.

“My dream is a future in which all the waste is reused, millions of people are able to improve their lives and go to school, setting up small companies around Wecyclers and in the recycling sector…” says Bilikiss. It is an ambitious dream, but, as one of the workers in the depot says: “You can see we are having an impact in our country, and that gives me the courage to continue with this work.”