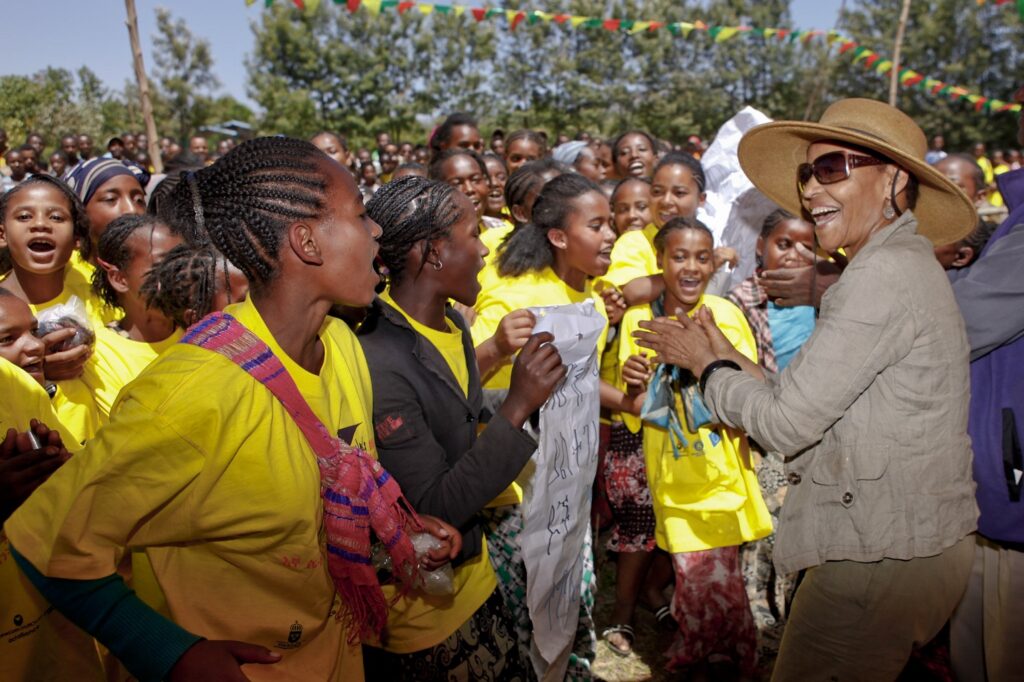 Bogaletch Gebre was awarded the Prize for her inspirational leadership and her determination to build on a remarkable personal journey to empower the women of Ethiopia and establish a true community-based movement for social change.

When women’s rights campaigner Bogaletch Gebre was told by doctors after a car accident in 1987 that she would never walk again, not only did she prove them wrong, she later ran six marathons. Such tenacity is one of Gebre’s trademarks. Since growing up in rural Ethiopia, she has overcome tremendous adversity to become the founder of Kembatti Mentti Gezzimma (KMG) Ethiopia, a non-profit organization that envisages a society where women are free from all forms of discrimination and violence and able to attain justice and equality for themselves, their families and their communities.

Bogaletch (Boge) Gebre was born in the 1950s in Kembatta, a region where female genital mutilation was endemic, bridal abductions widespread and reproductive health services virtually non-existent. Gebre refused to accept a fate of remaining illiterate and dreamed of learning the alphabet. On the pretext of collecting water, she started making illicit ‘hide and seek’ trips to the church school. She eventually received a government scholarship to attend the only boarding school for girls in Addis Ababa, went on to study in Israel, and later at the University of Massachusetts in the United States on a Fulbright scholarship. By the time she was working on a PhD in epidemiology in Los Angeles, her country was struck by famine, poverty and political turmoil.

These events drove Gebre to devote herself fully to helping the people of her native Ethiopia. She knew that back home, girls were still being failed by society. Girls were now allowed to go to school, but because their education was not a priority for their families, they were made to do chores and often failed their examinations. As a result, women existed in a kind of limbo: their “disobedience” sullied them in the eyes of men who refused to marry them, but they had no way of progressing and establishing a career.

In 1997, Gebre returned home with US$5.000 and a vision. Together with her sister she founded KMG Ethiopia, inspired by the realization that people cannot ‘be developed’ but can only develop themselves and that a relatively modest and focused impetus can unleash the potential that lies within communities. Its pioneering “Community Conversations” provide just that – they enable communities to discuss issues openly, first in gender- and age-specific groups and then across all groups in order to reach a consensus about what needs to be changed.

KMG’s first “Community Conversations” focused on HIV/AIDS prevention and the elimination of harmful customary practices such as female genital mutilation and bridal abductions. KMG has since broadened its scope to address development and women’s empowerment in a holistic manner. Rural roads and
bridges are built to reduce the time it takes to go to the market or fetch water and wood. Environmental rehabilitation projects enable women to find firewood or water closer to their homes. Economic empowerment activities enable them to become more independent. And education provides girls with skills and knowledge, as well as the self-confidence to claim their rightful place in society and become future leaders.

The societal change that KMG has triggered is substantial. Not only have tens of thousands of girls and women been spared gross human rights violations, but the transformation of their communities goes far beyond that. The status of women has changed so that not only do they now raise their voices, they are also heard and their communities have become more equitable overall. A 2008 UNICEF study confirmed that over 10 years, the incidence of female circumcision in KMG’s areas of operation had drastically decreased from 100% to less than 3% and recommended that its strategy be replicated in other parts of
the African continent.

Achieving this success took patience. Gebre emphasises that she and her colleagues did not just tell people what to do. As with all efforts seeking social change, the instigators of change need to listen to the local communities, learn from them, and gain their trust. Also, people tend to relate better to practical rather than abstract issues says Gebre: “When I first started talking to villagers about HIV/AIDS, women’s rights and human rights, these were abstract concepts, which are not their priority; what is important to them is, for example, trying to fix a broken bridge.”

The initial discussions thus focused on very practical, day-to-day needs of women and on creative ways to align these needs with longer term strategic issues facing the communities. Only later would they focus on women’s rights or HIV/AIDS, a disease that people refused to call by name. After many discussions, a village elder spoke up: “Why do we complain that we have no medicine for this disease? Unlike malaria, I cannot catch it by a mosquito biting me at night, and it is not spread like TB by sneezing. This disease does not touch me unless I touch it – I am the medicine.” Such realisations cannot be taught, says Gebre, they need to emerge from dialogue.

Later, the community began to talk about female genital mutilation and its harmful effects. Although the practice is rooted in the culture, not even the elders seemed to know where it originated. “It has always existed. They don’t realise that it is not in the Bible or the Koran”, says Gebre. With information to dispel myths, she reasoned, they would change their minds: “People in villages may be non-literate, but they are not stupid. They want what’s good for themselves and their children.”

Gebre believes gender discrimination is as pervasive and destructive as racial apartheid once was. “My dream for African women? That the world realises that the suppression of women is not good for business, for the economy, nor for human development. Africa, in particular, cannot develop unless it involves all of its people. This is what I want to see – a global coalition against gender apartheid.”